Michael Schumacher is almost universally recognised as one of the calmest, most concentrated and collected of all F1 drivers. Whilst his cerebral approach and demeanour has clearly aided him in his two decade long quest for unrivalled success, it has also resulted in many accusations of lifelessness as F1 fans criticised the champion for being dull and appear to fail to display any human emotion.

It is for this reason that certain moments in Schumacher’s life are overlooked and forgotten, when they should in fact be celebrated.

An example of one such occasion came on the night of Sunday October 12, 2003, hours after Schumacher had clinched perhaps the hardest fought of his 7 championship triumphs, in which his battle with McLaren’s Kimi Raikkonen and Williams’ JP Montoya fluctuated throughout that year’s 16 race campaign.

An elated Schumacher hosted a party that night in the Suzuka paddock. Vast quantities of alcohol were consumed, seemingly endless laughs were heard and surprisingly few photos were taken.

The festive affair was held predominantly in the Toyota team garage, after much negotiation from brother Ralf Schumacher – who drove for the Japanese team later in his career.

By 9.30pm local time the alcohol was already flowing and games had well and truly begun as the Schumacher brothers left a boozy trail of debris in their wake. French driver Olivier Panis was the first of Schumacher’s fellow drivers to join the party. He and Michael threw tables and chairs at the window broken by Ralf’s TV-throwing antics. Schumacher later hopped onto a fork-lift truck for a spin around the paddock.

Above: Michael took a fork-lift truck for a spin at one point, whilst heavily under the influence. Unsurprisingly, it ended in tears…

Above: Of course, that’s a fridge… Michael admires his handy work shortly after managing to knock a fridge over, whilst team personnel and friends look on. 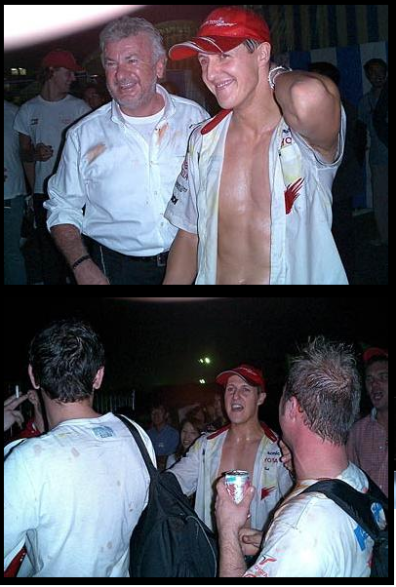 The following morning, Michael checked out of his hotel at 10:00, amazingly not looking too worse for wear. These pictures provide a rare insight into Schumacher’s private bubble whilst also evidencing that Schumacher’s humanity is very much alive, as he enjoys beers and banter with his boys as much as the rest of us.

Let’s hope Michael is back to his beer-drinking, karaoke-singing, forklift-driving ways very soon.

View all posts by 7ft James